UPDATED February 10, 2022 This piece has been updated to reflect the emergence of new technology

Should you have a hidden camera in your bedroom? Probably yes. Data from the FBI indicates that on average, in the US alone a home invasion/ burglary occurs every 26 seconds. With most people storing their valuables in their bedrooms, this is enough to justify having the best hidden cameras for bedroom.

Whatever your reasons are, you need the best hidden camera.

1Why would you need a hidden camera?

According to Wikipedia, 18-20% of married couples have dealt with a case of infidelity. With unmarried couples, this figure rises to about 30-40%. As if that’s not shocking enough, ever heard of Ashley Madison? In a report validated by Ernst and Young, the controversial “dating service” currently has 60 million members.

Simply, more people in relationships are out cheating, or looking for ways to cheat. While some may oppose having a hidden camera in your bedroom, you’re better off with it. For your peace of mind, and just in case your cheating partner has the audacity to cheat in your bedroom.

Entrusting your kid to someone else is always difficult, but in most cases, you may not have another option.

With a hidden camera, you can always monitor your kid’s activities as well as those of the nanny. This might also be useful in finding/vetting the right nanny for your kid(s). With the camera hidden you get to see the nanny for who they are.

Most people store their valuables in the bedroom. This makes it the most targeted room in your house during a home invasion.

You might not be storing valuables in your bedroom, but according to Safenow.org, burglars are most likely to target your bedroom first when they’ve broken into your home. For this reason, it’s best that you have a hidden bedroom spy camera.

2In What Devices Can They Be Hidden?

To have a truly hidden spy camera, the best hidden cameras for bedroom must not attract too much attention itself. By integrating the hidden surveillance cameras with audio in common everyday items, you can make your spy camera inconspicuous.

The best part about hiding cameras in motion sensors is that not only will it be inconspicuous but you’ll have the benefit of having the camera record only when motion is detected. This means the camera will use less battery power making it last long and it will also use less storage for the camera’s footage.

Apart from being inconspicuous, you’ll also have the option of easily plugging in the hidden camera to a source of power for continuous recording. Additionally, they have an added advantage in that you can put them in any room of your house while still remaining inconspicuous.

These also make for excellent hideouts for your hidden spy camera. All you need is to install it in place as you would a normal air freshener then wait for the footage. In most cases, they come with the camera already installed, and the air freshener itself may not be working.

These two not so obvious options make for great hidden spy cameras. Functioning as actual phone chargers, these hidden cameras start recording when they detect motion. They have the advantage of being plugged in to a power source, so you won’t have to worry about the battery not lasting.

This is the best place to hide a spy camera. Not only can you get an overhead view of the room, but you can easily plug in the camera for continuous power supply instead of relying on battery power.

Fitting in naturally to the bedside table or even in the living room, a picture frame makes for another great place to hide your spy camera. You can add a small wireless spy camera to the picture frame or you can opt for a picture frame integrated with a camera already.

In all cases, it is better to have a hidden camera with a large battery capacity and with an option of being plugged in for continuous recording. Some battery powered cameras can also last as long, recording only when motion is detected, or by recording still images. The best option for a hidden camera would be to get one that can be plugged in to a power source for continuous recording, still with the option of being battery powered. 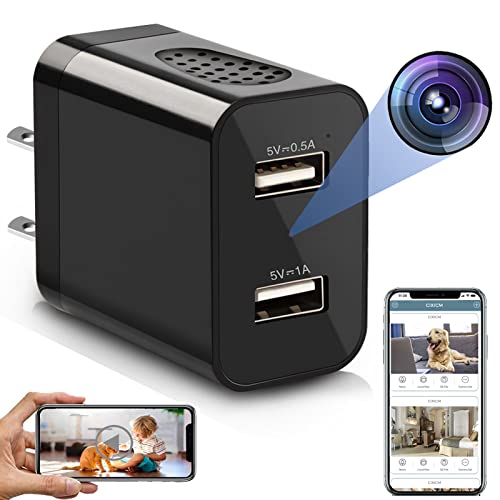 At a minimum, the hidden camera you choose should be able to record footage at 720 pixels. Less than this and it will be difficult to make out small details or even identify someone in the captured footage.

Includes audio or not

While it would be great to have audio together with the video footage, there are certain limiting factors.

A hidden spy camera with cloud storage is the best option you can go for. Cloud storage offers more storage (some plans offer well over 1 TB storage), with the convenience of being able to download footage to your other devices. Hidden cameras with local storage are also worth it, provided they offer more storage.

If a hidden camera has the option for remote viewing, the better. You’ll need to have the hidden camera connected to your Wi-Fi network to access the footage from anywhere using any device (smartphone/ tablet). For some models with motion sensors activated you can also get real time alerts whenever motion is detected in your house with accompanying real time footage.

That sums it up for the best hidden cameras for bedroom. Remember, it’s only as good as it serves your purpose, so go for the best video quality, more storage, cloud or local and always the camera must be inconspicuous.

Know What Tracking Devices Look Like And Where To Find Them

What Are Private Investigators Allowed To Do?

How To Stop A Private Investigator From Following You

Choose The Right Small Hidden Cameras For Your House

What Security Cameras Are Best For Your Home

Christian Mathews 0
UPDATED February 10, 2022 This piece has been updated to reflect the emergence of new technology

How To Secure Your Smart Home Devices

How Many Security Cameras Do I Need?

Security Picks is your one stop website for all things security related. We provide you with the latest security news, guides and information, keeping you safe, secure and protected.
Contact us: [email protected]

Best Smoke Alarms For Your Home

Carbon Monoxide Detectors: Where To Place Them

Mac Passwords:Where Are They Stored?